As the number of cage free houses have grown i n recent years, so have the challenges of capturing consistent and accurate egg counts. Initially, it wasn’t clear whether the cage free environment itself was contributing to the l ack of confidence in egg count data, or if the quality of the egg counters themselves were somehow to blame.

While PMSI has been using I R counters for many years with great success, recent conversations regarding count accuracy caused PMSI to look deeper into the issue and examine the factors that influence egg count accuracy.

Below are just some of things PMSI has done to both identify conditions leading to inconsistent egg counts and improve egg count accuracy.

Although some of these efforts are ongoing, we want to share some of the lessons l earned as well as recommend actions you can take to improve egg count accuracy and consistency i n almost any situation where PMSI’s IR counters are used.

Our i n-house testing has demonstrated that PMSI’s I R counters capture accurate counts when installed +/- 3/8” within the manufacturer’s recommended installation height and egg flow i s reasonably smooth. When egg counters are installed outside this height tolerance, egg counts are less reliable. Eggs must also pass within the specified side boundaries of the counters. Of particular note i s the width discrepancies between equipment manufacturers. For example, not all “10 inch” belts are the same.

To improve egg count accuracy, install counters, brackets, and fasteners that are appropriately sized based on the actual width ( not advertised width) of the equipment manufacturer’s egg belt. Installing the right size counter to manufacturer specifications reduces the number of variables contributing to poor counts. This ultimately increases egg count accuracy and requires less counter tuning. 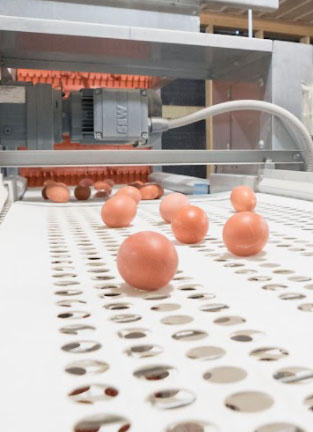 Of particular concern is egg roll-back, a condition that tends to be more prevalent with flat belt systems under heavy loads. Flat belts often stretch several inches when the motor is first turned on. When the motor is stopped, the belt can contract back towards the center of the house. This can cause eggs to travel back under the counter resulting in eggs being counted multiple times. This problem will be more acute on days involving a high frequency of starts and stops.

Place egg counters downstream from the belt and utilize braked motors or VFDs to bring the belt to a slow controlled stop. One-way bearings or a similar mechanism are also an option.

One very important and often overlooked factor contributing to accurate egg counts is the location of the counters. Recognizing that counters need to be located as upstream as possible in order to provide information to the REF system, positioning counters near transition points or between converging conveyor systems or elevators can contribute to inaccurate counts. 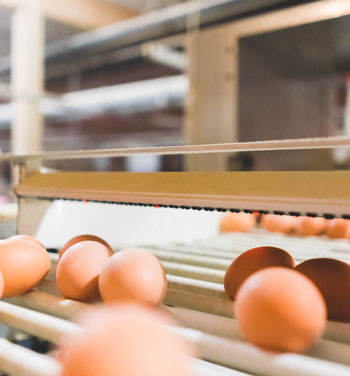 Egg count accuracy can be affected by the installation of counters that are either too small or too large for the surface area being counted. Fortunately, with the new widths available in the IR series, accurate egg counts can be achieved on any of today’s cage free systems.

Install PMSI’s IR counters that are not less than 1” narrower than the outside edge of the trough or conveyor rail and never install counters that hang over the edges of the counting surface. Finally, always keep the outside pair of lenses at least ¼” from the trough wall to avoid false reads due to side wall reflections.

Cage free environments can be especially hard on equipment. This is true even on the mounting brackets themselves. Vibration from daily operations or unintentional bumps in the course of day to day maintenance activities can cause brackets to move out of position or become less stable over time.

Use PMSI’s new, purpose-built counter brackets that ensure proper egg counter positioning and allow for easy cleaning. These brackets are sturdier than previous brackets and make installation easier. Plus, PMSI brackets are designed to tip up to allow easy access to egg counter lenses for cleaning.

Whether you are operating a caged or cage free environment, managing dust and other particulates that travel through the air can be challenging. If allowed to accumulate on or around counter lenses, count accuracy can be compromised.

Use a fluffy towel-like material for getting i n between protruding lenses. Develop a schedule that incorporates daily cleanings ahead of each day’s egg run. Inspect counters frequently to ensure lenses are free of feathers or manure which can block counter lenses and lead to inaccurate counts.

For our full report on Egg Count Accuracy, contact PMSI at info@pmsi.cc